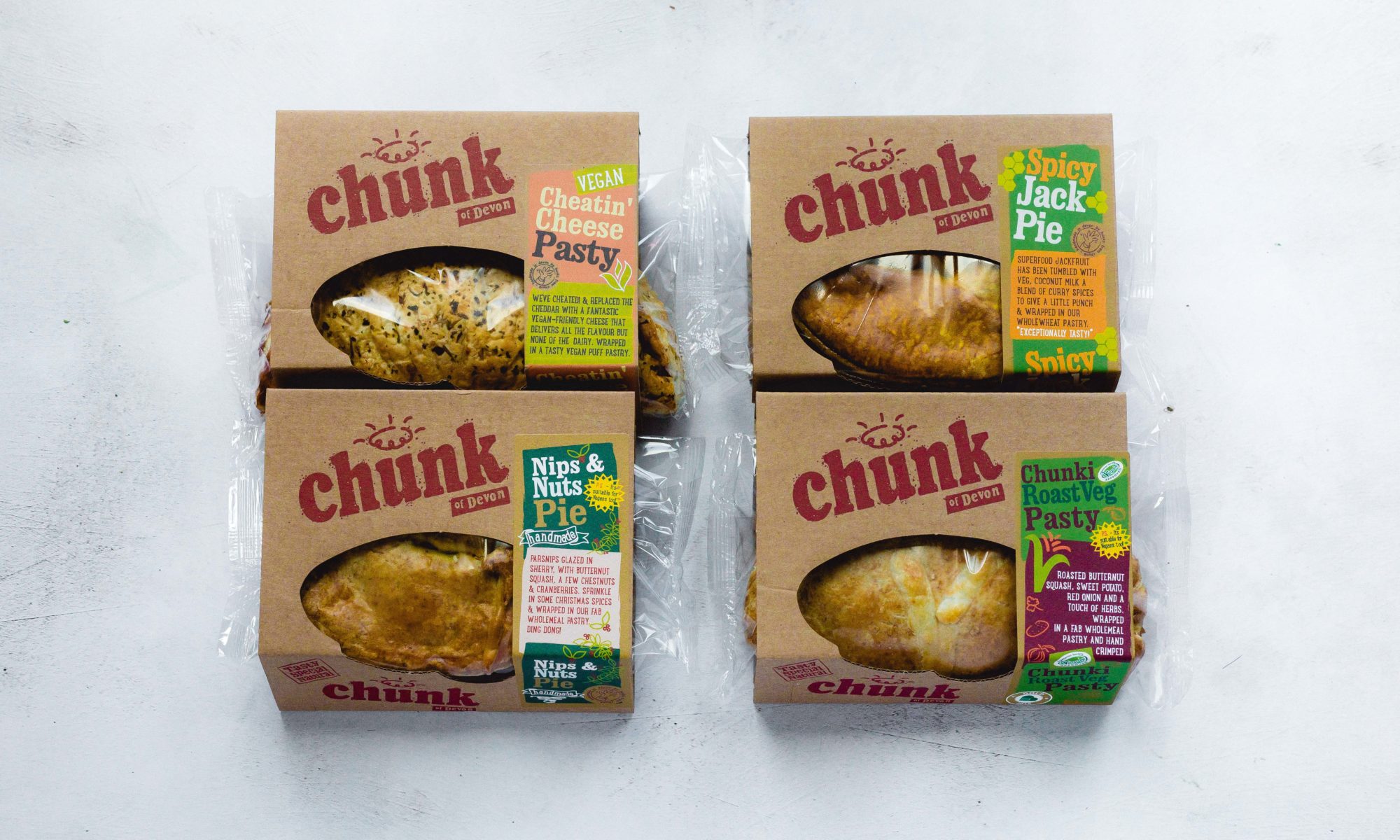 Double winners of Britain’s Best Pasty, Chunk of Devon, has launched a NEW vegan
selection box for Veganuary. The Vegan Selection Box consists of three award-winning
vegan pies and pasties and one new product – the Cheatin’ Cheese Pasty. The Vegan
Selection Box is available for nationwide delivery from 1st January from chunkofdevon.co.uk.
Prices include free postage and packaging.

Simon Byron-Edmond, head hunk at Chunk, explains: “We have been creating award-
winning pies for nearly 15 years and our focus has always been on producing great tasting
products, using locally sourced ingredients with no additives. This collection is no exception.
It’s all about the taste, so whether you are vegetarian, vegan or just an all-round lover of
pies, we are confident that you’ll adore our vegan range.”

Vegan Selection Box (£30.00 for a box of 8)
Can’t decide which one to buy then Chunk’s Vegan Selection Box gives you the chance to
try all four of their awesome vegan pies and pasties. With such a delectable range, it’s hard to find a favourite.

Chunki Roast Veg Pasty (£28.00 for a box of 8 pasties link to buy)
Winners of Taste of the West Gold award 2020, the Chunki Roast Veg Pasty is a rustic
gourmet delight. Packed full of roast vegetables, encased in pastry made with wholemeal
flour for extra depth of flavour, it is topped off with a vegan-friendly glaze made with peas.

Spicy Jack Pie (£29.20 for a box of 8 pies link to buy)
GOLD winner of British Pie Awards 2020, Spicy Jack Pie is a real crowd-pleaser. Filled with
a rich curry of vitamin-laden jackfruit, sweet potato, squash, peppers and coconut milk, this
vegan virtuoso is swathed in wholewheat and turmeric pastry and topped with fennel seeds.

Nips & Nuts Pie (£29.20 for a box of 8 pies link to buy)
Chunk of Devon’s Nips & Nuts Pie is a truly vegan feast. Loaded with parsnips glazed in
sherry, butternut squash, chestnuts and cranberries, this parcel of deliciousness comes
wrapped in their fabulous wholemeal shortcrust pastry.

Cheatin’ Cheese Pasty (£28.00 for a box of 8 pasties)
Chunk’s brand new Cheatin’ Cheese Pasty boasts the lightly roasted potato chunks, onions
and herbs of their regular cheese pasty all wrapped in a vegan puff pastry. Chunk has
replaced the cheddar with a fantastic vegan-friendly cheese alternative that delivers all the
flavour but none of the dairy.

Disclaimer: This article is not owned by FoodPress. Any views or opinions that are expressed are by that of the feature writer.