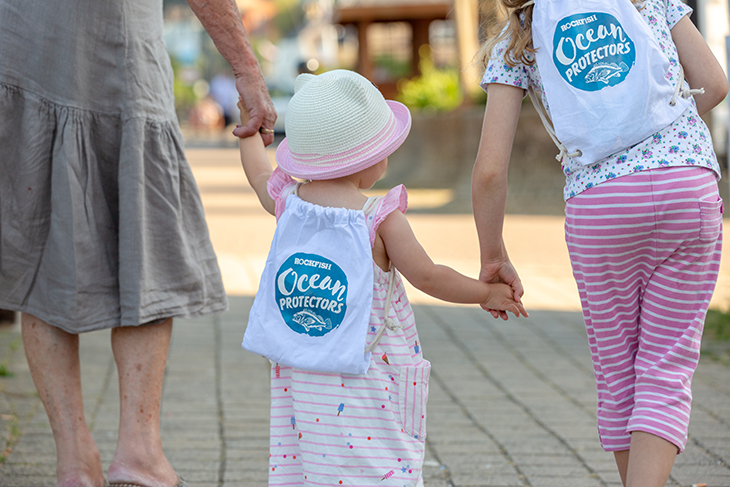 The Rockfish restaurant group, headed by Mitch Tonks, is revolutionising the kid’s pack as we know it.

Their second version of the already popular “Squid” Packs challenges kids to become ‘Ocean Protectors’ and do their bit to think of the future of our oceans.

The business is at the forefront of sustainability with buying local and sustainably sourced fish at the very core of its DNA. They have already twice won the National Seafish Good Catch Sustainability award and Mitch himself has just last week been awarded Chef of the Year by the Marine Stewardship Council.

Children can not only get their first taste of sustainable seafood at Mitch’s restaurant group, but they can also have a bit of fun with packs which contain a pack of puzzles and fun facts, a little wooden dolphin puzzle to make up and then colour, a biodegradable bag for doing a mini beach clean and a card game based on Old Maid but using fish where the person left with the plastic bottle card is the loser. This is all presented in a small cloth bag which can be used for school or beach trips.

The restaurant group were one of the first to remove all single-use plastics from their restaurants and innovatively they put water taps outside each of their restaurants, so customers and passers-by can just refill their reusable bottles – pretty handy in this current heatwave too! The restaurant group also sponsor many local organisations including ‘Till the Coast is Clear’ who do beach cleans locally and the Exmouth Beach Rescue club who also run regular beach cleans.

Mitch said, “We thought it would be great for children who eat with us to learn what they could do to help the oceans whilst having something fun and enjoying a bit of seafood. We’re trying to actively engage and both champion and innovate great initiatives locally in our neighbourhood.”

The kid’s packs come free for children eating from the children’s menu and contain:

Message in a bottle card game;

A pack of coloured pencils;

A cloth bag to carry it all in.

Some items are not suitable for children under 3 years.